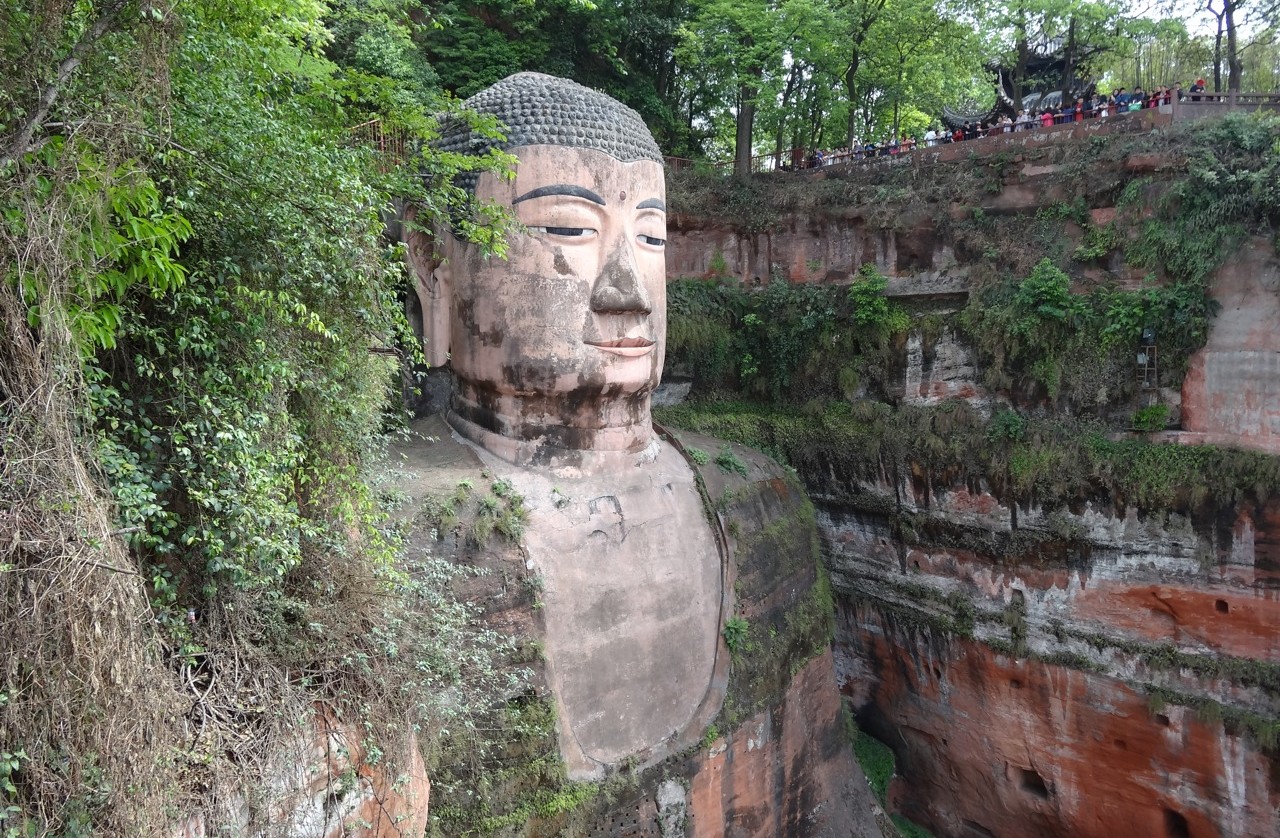 a view of the buddha...from the long line

Chengdu has two famous notiarieties. The first are the pandas and the second is Leshan Giant Buddha (literal translation too). Locals will say you are crazy if you think you can do both in one day, but this is China…anything is possible! Leshan lies far outside city limits, so far that it is technically another city. It can easily be reached by buses running every 15 minutes from Xinnanmen Bus Station in Chengdu. If you go in the morning, you will be on a large normal bus…any other time is a much quicker official minibus that seats six passengers. The journey takes 2:30 max on highway mostly. They will offer you two options, one is to go to the city and the second directly to the Buddha. If you choose the second option (which saves trouble and time) you will be brought to the gate, whereby you will be “forced” to take a free shuttle to the tourist center and a more expensive gate. You will have to walk back a bit to find a cheaper entrance to the Buddha.

Although an incredibly popular destination, the Buddha’s park grounds are immense, which means you can enjoy relative tranquility. You will be offered many different ticket options, because different parts of the park has different fees. Unless you have the whole day, it is unlikely you can see the whole park. The reason is because the Buddha may have a very very very long queue. You start at the top and must follow a line all the way to the bottom and then back up again. The Buddha is immense! One unfortunate part is that while you are walking around you will see many disfigured deities. This is due to the Cultural Revolution which saw many heads toppled off ancient religious statues. The Giant Buddha was just too big for anyone to succeed.

The story of the Buddha is that the city across the river, Leshan, had a severe flooding problem. The flooding meant crops were too often lost and people went hungry. Looking at the river, you can see something is definitely off. It is incredibly turbulent and wild at all aspects. The Giant Buddha was ordered to be built in order to calm the river, well it turns out all the giant stone thrown into the river to build the Buddha did just that. Hence the Buddha is considered miraculous, for saving the city of Leshan.

If you don’t like lines and expensive tickets, another option is to take the bus into the city and get to the docks. At the docks is a boat that takes you to pretty much the same view that you would get waiting in line. Furthermore, you can see the two statues on the side of the Buddha which you can only see from the river. This is quick, fast, painless and is cheaper than going to the park. The biggest perk is that taxis are very hard to find, especially when coming back from the Buddha (we waited an hour without even an empty minibus to take us to the bus station). What is most important is getting back to the bus station you came from (Xiaoba). We took a minibus from the Buddha back to “the bus station”, but it was the wrong one. This bus station took us to somewhere closer to Chengdu’s airport (yes you can go to the Buddha directly from the airport). And the bus station there had few or little options to take us back home.

Still, the Buddha is a definite must see when traveling to Chengdu!