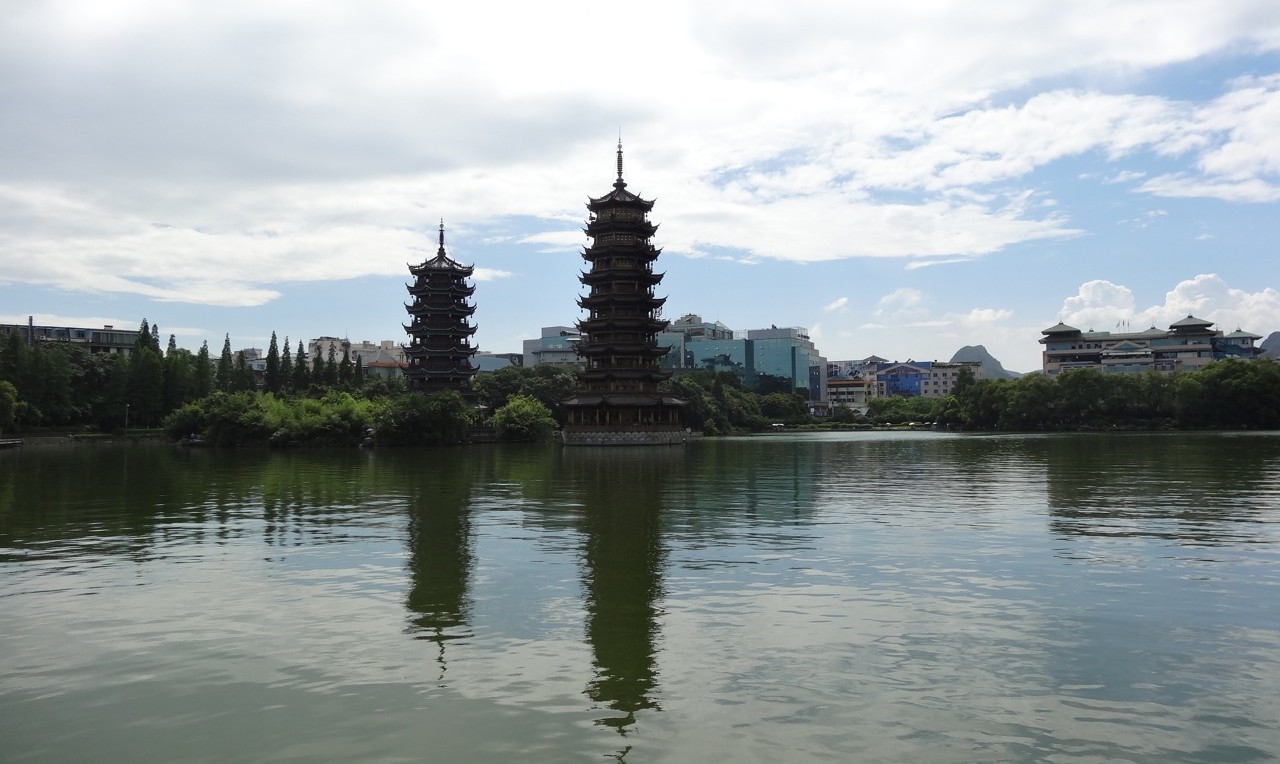 Scattered karsts dot the urban landscape of Guilin. Connected by highways, airports, and docks, Guilin is the center of Guangxi’s karst topography tourism sector. Great rice terraces lay in the northwest, while the Li river winds southeast to Yangshuo. The city remains one of the most popular destinations in China and retains a mix of urban charm and natural delights. None-the-less, Guilin does not offer much when compared to Yangshuo. Matter of fact, unless you are willing to pay money to even see natural landforms, Guilin really has nothing.

One such example is the famous Elephant Trunk Hill. Although on the river and theoretically able to see from anywhere, the city created a very “smart” idea to block the view from non-paying customers. The hill has been cut off from the rest of the city through landscaping innovations of large bushes to make it almost impossible to see the landform from afar. Instead there is the expectation that this natural part of the city is only available to tourists willing to shell out around $20 each to see the form. Another way is to pay for a boat guide to take you to it by river. Albeit one of the most popular attractions in Guilin, it is worth the skip.

Tourist bus lines connect most of the attractions for free. It seems this is more in order to combat the frustrations and barriers foreign tourists have when using bus lines. The bus lines connect almost every single tourist attraction and go across the city and river sides (you still won’t see much as most attractions are blocked from view). There are peaks everywhere, and each one costs money. If you have been or are going to Yangshuo it is best to just avoid paying for anything. Walk up the Xi River from below Elephant Trunk Hill and go north to Yushan Hill Park. At Brocade Hill Park there will be an entrance, steer right where motorcycles park in a cave. When you pass the cave you will have stunning views and a park side walk. Here is a wall bridge that locals like to stand on to watch the innovative boat mechanism that pulls boats into the walls.

The city walls here are old, so I was told. But the tops have definitely been reconstructed. Once near Yushan Hill you will find a small island on the right where fishermen live with their families and provide their fresh catch at the small outdoor restaurants. In the center of the city is Princes City which is a large walled city that is also accesible. In the center is another ticketed entrance, to the right you can enter for free. This is due to the fact that the center of this “city” is a university, but it makes a great walk at night. There are some more modern palaces inside, which were bombed in past wars and then rebuilt.

Guilin is a hop on, hop off point. Besides Yangshuo there are two major places worth travelling to. The first is the Longsheng Rice Terraces or the Dragon Terraces. Famous for its rice fields on the side of the mountain, a trip here requires at least a one night stay or a very hasty day trip. The second is Xingping, which is becoming popular as Yangshuo has become quite crowded with tourism. Xingping has a popular hiking trails connecting it to other villages. All in all somewhere in your trip, Guilin will likely have to be visited. The overemphasis on paying to see nature has been exaggerated here, but might as well make the most out of your time here.