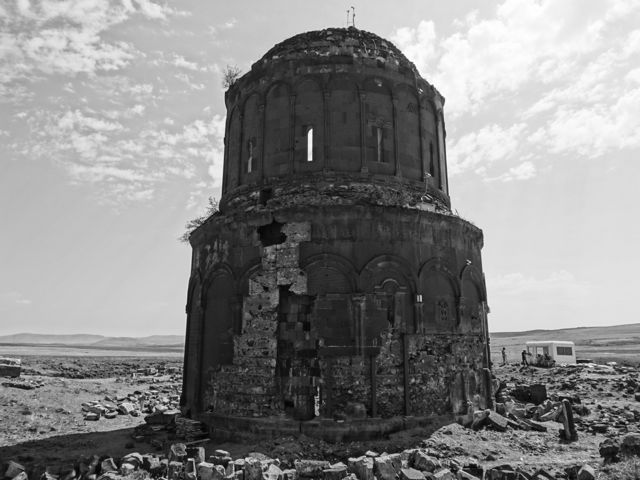 From dust we were created and to dust we shall return… 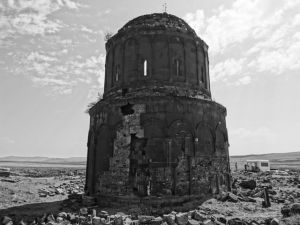 What is Ani? In a way it is a testament to time, because I don’t think most people have ever heard of it. Even Turkey, which it now lies in, denied its existence as well. Ani is a place we often don’t hear about other than in legends and stories from long ago. A once great civilization at the center of the silk road, once the rival of the great city of Constantinople, and once a massive city of thousands of inhabitants fell to the ground to never be heard of ever again. 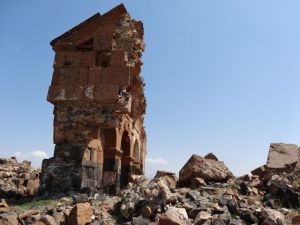 This is Ani. “The City of 40 Gates”. A great city and capital of the massive Armenian civilization now lies in ruins at exactly the border of Turkey and Armenia. Built between two massive gorges, Ani was indestructible…an ancient bridge over one gorge that once held the silk road and connected to modern day Armenia still lies in ruins. The Cathedral shown in pictures looks insignificant, but to those who bother to pass inside its small gate are introduced to the reality of how majestic this city once was. 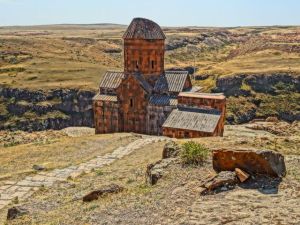 Western Armenia quickly began to erode and Ani was captured by Turkey in World War I and then returned and then a few years later conquered for the final time. Much of its collections made it across the bridge into Armenia and into its modern day museums. The rest were did not exist according the Turkish government.

Up till recently the site was completely neglected. The sad fact is that even to this day Turkey completely denies Ani’s Armenian heritage. The city is obviously Armenian, you can see Armenian inscriptions everywhere, yet the descriptions they provide say it was some independent king or it was Georgian (although they did conquer it, but then gave it back to the Armenians). It is widely known that Eastern Turkey was part of Armenia up till 1920 (which really isn’t disputable ancient history right??). Eastern Turkey is riddled with relics of its Armenian legacy, many being rehabilitated as just built by the Armenian populace that “magically disappeared”. Even some educated Turks follow this logic, which is quite ludicrous. Ani is part of Turkey now, . 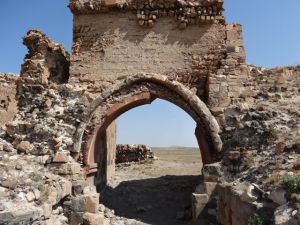 Today the site is undergoing massive -restoration work. The reality is that Eastern Turkey is relatively poor and Ani has been ranked as a top tourist site in Turkey. In pictures you see some buildings standing, but it is what looks like grass where the gold really lies. This was a massive city, not some churches on a field, so brick by brick is being dug up. Entire city streets are being put together, and the churches are getting much needed braces in case of earthquakes. The military has also been pushed out of the site (why would Armenia ever invade and harm a site so venerated by them?), although you can see an Armenian guard post across the gorge. 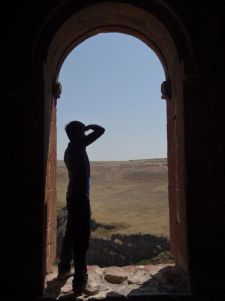 There is nothing nearby aside from a small village outside the city gates. At the furthest end of the city is a massive fortress. It says it is off-limits via an old sign, but a newer sign points in its direction. There are no guards and no military and when you get to the fortress there is a tourist sign welcoming you. I figure it is open, but they don’t want many people going there since it is a lot of rubble that they haven’t gone through yet. At the top of the fortress you can see the entire city and more Armenian guard towers (after zooming in, I doubt they are even manned…it had a scarecrow on the top, it is highly unlikely Turkey and Armenia will ever go to war…the border is pretty much closed due today mainly because of egos).

Ani is for sure a must see and it definitely takes more time than you would think. 3 hours minimum if you want to see the whole city. There is no entry from the Armenian side (as the border is closed and there isn’t a bridge anyways…the old one could never be rehabilitated unless they tore it down and started anew). From Kars it costs 80TL for a taxi and they will wait for you too. 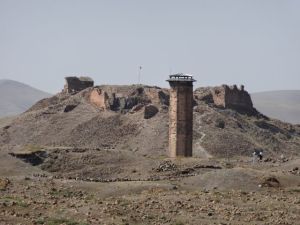 Make sure to ignore all the history presented, it is a sick and perverse thing they are doing to skew history like so. Ani should make you angry. These people have lived together for thousands of years, this city was built by Armenians and numerous different people including the Turks once ruled it. It is just disgusting to let egos cloud the truth and prevent peace and prosperity when both Turkey and Armeniacould do so. Don’t miss Ani, it is an unforgettable place.